for hydraulic cylinders and -systems

Technology from WATZ Hydraulik employed against chemical weapons.
Chemical weapons are justifiably considered the most dreadful and dangerous means of waging war. Consequently, the international community banned the use of chemical and biological weapons after the end of the Second World War. Aside from the numerous infringements of this international law, humanity has been occupied with one question in particular since then:
What to do with the chemical weapons already produced and in storage? This arsenal represents a great hazard in two respects simultaneously. 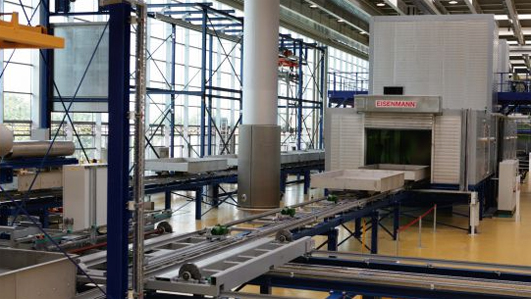 Particularly in Eastern Europe and the former Soviet republics, there are even today still large depots of chemical weapons. In the two Russian cities of Kambarka and Potschep, there are plants for the destruction of chemical weapons that were put into operation with the help of German companies. Since 2006, weapons have been systematically destroyed there.

The plants convey 1,000 kg/h of reaction mass each to be incinerated. Technology from WATZ Hydraulik is also employed in both of these plants. The Stuttgart company, Eisenmann, is considered to be a worldwide leader in the supply of surface, environmental and specialty processing technologies. Their know-how in plant construction for exhaust air cleaning and waste water treatment as well as particularly the thermal recovery or disposal of wastes and chemical weapons destruction. Eisenmann delivers technically sophisticated systems for these use cases including detonation chambers, cutting-edge robotic technology for the transport of chemical weapons materials and furnaces in which, for example, nerve gas can be incinerated without posing a hazard. Many of these plants contain hydraulic products from Central Hesse.

Because even the smallest mistakes can have fatal consequences in all of these areas, the weapons destruction firms and the manufacturers of the required equipment consistently rely only on suppliers who guarantee the very best in quality. This is why Eisenmann employs products from WATZ Hydraulik when it comes to hydraulics technology. Due to the special requirements involved, WATZ was included in the planning and design engineering early on. In cooperation with the Eisenmann project planning department, it was possible to work out optimal solutions for this highly sensitive application. WATZ supplied the complete hydraulic station for the supply of the bogie hearth furnace. 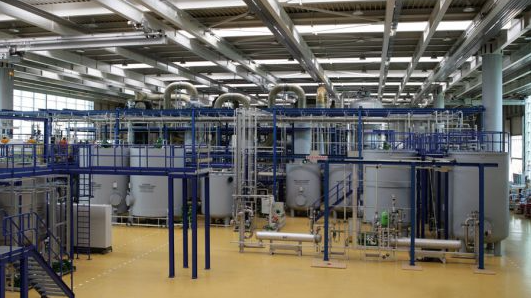 The assembly installed on a platform serves to open and close the 18,000 kg lift gates of the bogie hearth furnace. Each lift gate is driven by a separate unit. In order to increase the operational safety, the units are each switched over to the respective other lift gate. The lift gates are lifted and lowered by means of chains. When the lift gate is lowered, it rests on rollers and is drawn in against the incinerator chamber by means of additional horizontally mounted synchronous cylinders.

The drawing in of the gates must be carried out at a specific pressure because during the incineration process in the furnace, there can be a pressure increase of +300 mbar. Special safety valves prevent any inadmissible overpressure in the chamber. Moreover, pressure accumulators are integrated to prevent pressure spikes. The pressing of the gates against the chamber is also ensured in the event of a failure of the hydraulic system. Apart from this, the gates are also secured against falling to the ground if there is a sudden pressure loss. Finally, during operation of the system, it is only possible to open one gate respectively. In other words, the system WATZ supplied ensures maximum safety – and that on 350 operating days per year with three shifts each! As a matter of course, the WATZ technicians were on site both for the commissioning of the plant as well as for the respective service intervals when due. The documentation was turned over to the customer in Russian, English and German.

Information, questions or a quotation?